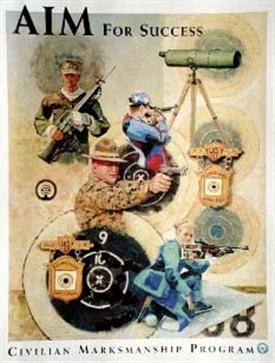 The (CMP) promotes firearms safety training and rifle practice for all qualified U.S. citizens with special emphasis on youth. The CMP operates through a network of affiliated shooting clubs and associations that covers every state in the U.S. The clubs and associations offer firearms safety training and marksmanship courses as well as the opportunity for continued practice and competition.

The CMP was created by the U.S. Congress. The original purpose was to provide civilians an opportunity to learn and practice marksmanship skills so they would be skilled marksmen if later called on to serve the U.S. military. Over the years the emphasis of the program shifted to focus on youth development through marksmanship.

For more information on the CMP please visit their website at www.odcmp.com

The CMP requires all those purchasing from them to be a member of a qualified Club or Organization.  Your membership with SD Shooting Sports Association gives you the membership qualifications needed for the CMP!  Just include a copy of your SD Shooting Sports membership card with your CMP order and your have that requirement covered.

Check out the SD Shooting Sports Event schedule for CMP qualifying Garand Shoots. If you participate in one of the CMP or Garand Shoots listed, you will have shoot your qualifying marksmanship requirement needed to order from the CMP.

The CMP currently has over 1,800 affiliated organizations located in every part of the country. A listing of all CMP affiliated clubs is available at on the CMP web site. If you have any difficulty in locating a club, please contact the CMP at 256-835-8455. They will be happy to find one for you.

The CMP issues updates and offerings constantly. To read the current and past updates issued by CMP please go to their “What is the CMP Doing” page:

In 1903, the War Department Appropriations Bill authorized the establishment of the National Board for the Promotion of Rifle Practice as well as the National Rifle and Pistol Trophy Matches, a concept strongly supported by President Theodore Roosevelt, an avid rifle shooter. The measure provided a great boost to civilian marksmanship training, an effort begun a generation earlier by the National Rifle Association.

At its first meeting, the Board determined "That every facility should be offered citizens outside of the Army, Navy, Marine Corps, and organized militia [National Guard] to become proficient in rifle shooting, and that this purpose can best be accomplished by means of rifle clubs."

In 1905, another step forward was taken, when President Roosevelt signed Public Law 149 into effect, authorizing the sale, at cost, of surplus military rifles, ammunition, and related equipment to rifle clubs meeting requirements specified by the Board and approved by the Secretary of War. The National Defense Act of 1916 authorized the War Department to distribute arms and ammunition to organized civilian rifle clubs under rules established by the Board, provided funds for the operation of government rifle ranges, and opened all military rifle ranges to civilian shooters. Today, many military base rifle, pistol and shotgun ranges are used by civilian shooting clubs and associations, providing excellent opportunities for training, practice and competition.

The National Defense Act also created the Office of the Director of Civilian Marksmanship (DCM), under the Board. For many years, the DCM’s programs were managed by the Army. However, the National Defense Authorization Act of 1996 (Public Law 104-106, effective date: 2/10/96) transferred the DCM’s function to a new, private, non-profit corporation chartered specifically for this purpose. The new entity, the Corporation for the Promotion of Rifle Practice and Firearms Safety, Inc., is directed by a nine-member board of directors initially appointed by the Secretary of the Army. The restructuring of the CMP, earnestly supported by the NRA, was opposed by anti-gun Members of Congress, who would prefer to abolish the program entirely, eliminating its firearm safety training activities and destroying its rifles and ammunition.

The CMP continues to administer the historic Excellence-in-Competition program and to sponsor the National Trophy Matches, which include the President’s Rifle and Pistol Matches, fired with Service Rifles (such as the AR-15) and Service Pistols. Congress has directed the Corporation to give priority to programs that reach as many young Americans as possible.

The CMP has no future federal funding and the Corporation must rely entirely upon income generated through sales of rifles, ammunition and related equipment; affiliation and match fees; etc. The Corporation is tax-exempt and may solicit funds and services by donation or request. All funds collected by the Corporation may be used only to support the official functions of the CMP. The DCM is a civilian employed by the Board of Directors and is the chief administrative officer for the daily operations of the CMP.

The CMP is authorized to loan, sell or lease rifles, ammunition, targets and other supplies to qualifying clubs and associations. CMP may provide .22 rimfire ammunition and .177 caliber pellets for use by shooters ages 10-20, based on junior members’ participation in the affiliated organization’s programs. Youth programs conducted by the Boy Scouts of America, 4-H, American Legion, and other civic groups are a priority. Competitors 20 years of age and under may receive travel stipends to attend the National Trophy Matches, the Small Arms Firing School held during the matches, and special training clinics.

The CMP is authorized to sell surplus M1 "Garand" rifles, ammunition, rifle repair parts and accessories, and competition gear such as shooting jackets and targets, to individual members of its affiliated organizations actively engaged in marksmanship training. Match-grade AR-15s may be purchased through the CMP, by affiliated organizations.For more information about the CMP, CMP Clubs, Excellence-in-Competition matches, and purchase procedures for M1 and AR-15 rifles, and other equipment:

The NRA was established in 1871 and held its first "Annual Matches" in 1873, at the legendary Creedmore Range, on Long Island, N.Y. Later, the matches were moved to Sea Girt, New Jersey. Today, the NRA’s National Championships (a variety of matches in highpower rifle, smallbore, pistol and muzzleloading arms) and the CMP’s National Trophy Matches (for service rifles and service pistols) are held during the summer, at Camp Perry, Ohio, east of Toledo on Lake Erie.